Project was finished safely, efficiently and to schedule

Project was finished safely, efficiently and to schedule

Load-out of the first semi-submersible hull for the Ling Shui 17-2 gas field project has been successfully completed in southern China. This was also the first transverse hydraulic shoe load-out of this grade weight to be completed in the country, with a hull structure weighing at 34,000t.

Mammoet’s extensive offshore expertise has seen it break many records; recently loading out Vietnam’s largest jacket and decommissioning both the 24,000t Brent Delta and 25,000t Brent Bravo topsides. The experience gained during these projects was again vital as Mammoet’s engineers planned the load-out in fine detail, working within fine mooring and ballasting tolerances to achieve a level skidway.

Mammoet’s team started by unloading the skid track containers in a designated laydown area using 80t cranes. Forklifts of 5t to 15t and a custom-engineered electric trolley positioned the skid track sections. Thereafter, heavy-duty skid shoes and other equipment was installed onto the skid lanes using 80t to 250t cranes, and pulled into position by means of winches. 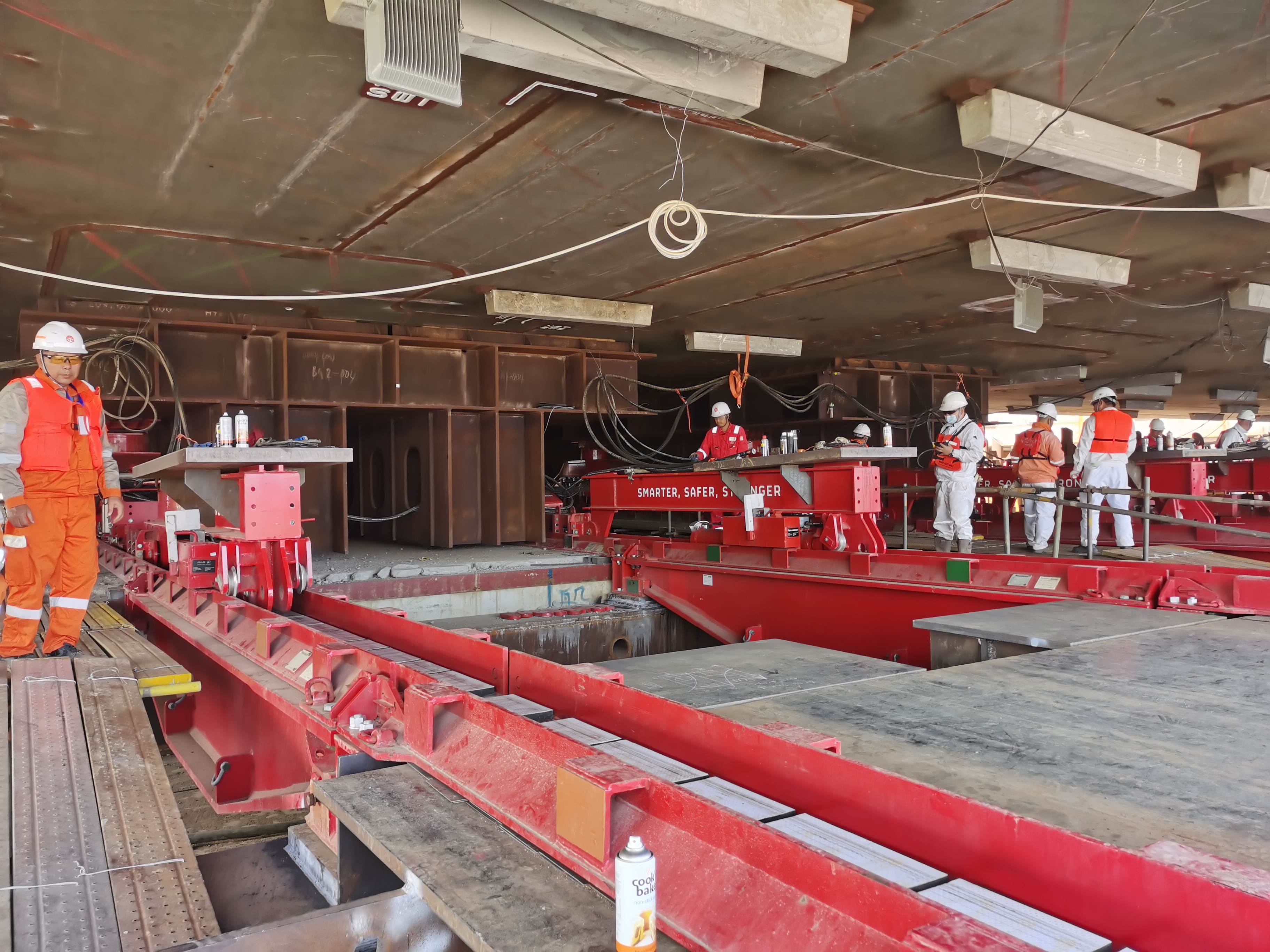 Once all skid shoes and push-pull cylinders were positioned in the correct location, the team then installed all hydraulic hoses and data cables. At a later stage, the skid tracks on the heavy transport vessel were laid into position using a lattice-boom crawler crane.

The load-out then took place with the hull skidded for a total distance of 90m. The entire skidded load-out took 24 hours for completion and skidding was finished in approximately 15 hours. The skidding system itself consisted of 48 800t and 24 650t skid shoes. All equipment was designed by Mammoet. 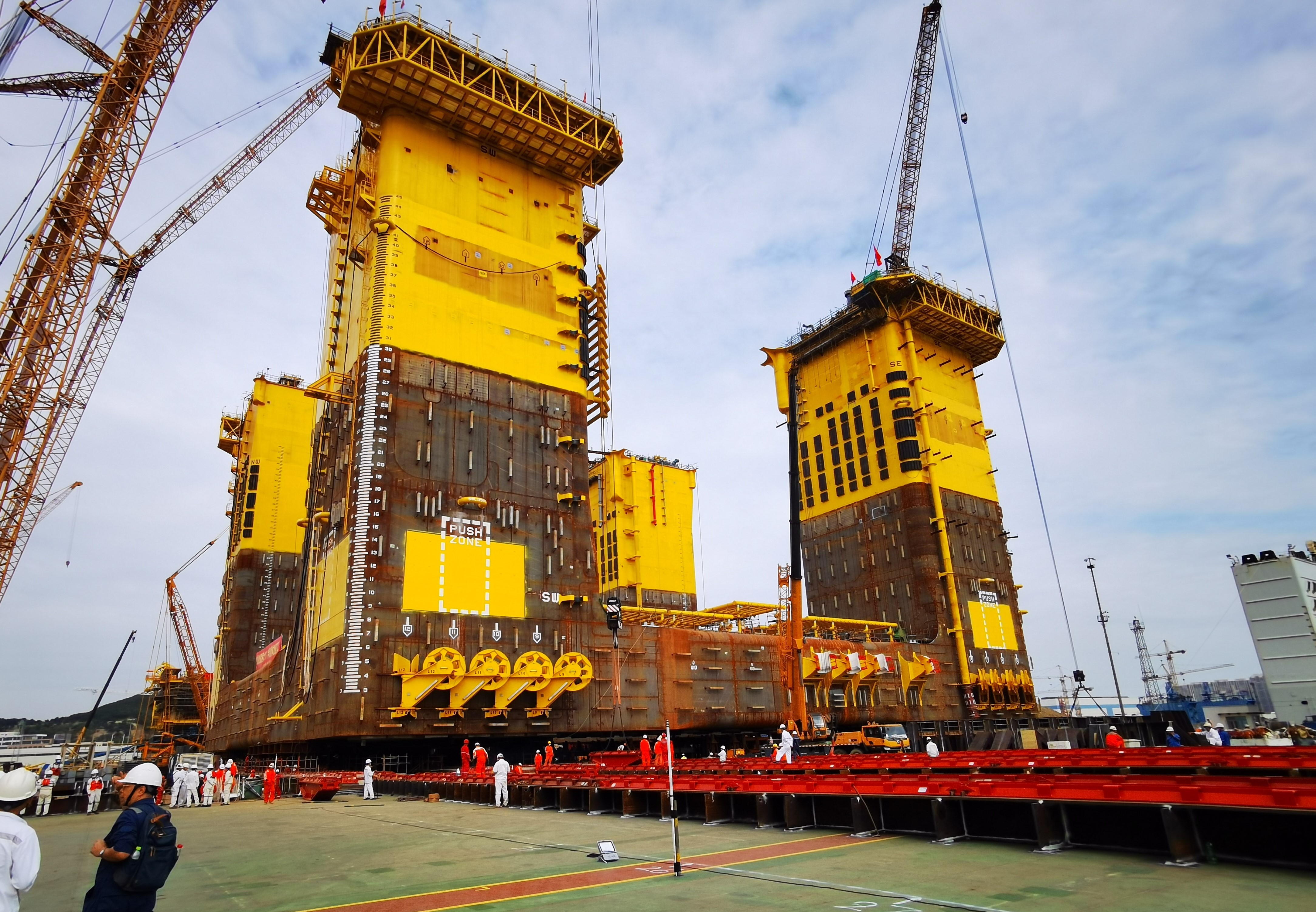 As of standard offshore project executions, the team adapted to daily changes in schedules and on-site requirements. This was to ensure the maximum site area can be used for operational activities during the skidding operation, and for successful completion of work by the agreed deadline.

Equipment and manpower were both mobilized on-site despite coronavirus restrictions. Daily toolbox briefing sessions were given to provide clear direction on safety and interoperation between Mammoet and client teams, making sure all workers were kept informed on adaptions made to the site. Risk assessments on all site activities were made regularly and provided to the client’s management team.

All works were completed safely and efficiently, while meeting the client’s expected deadline. “We are pleased to express our satisfaction and appreciation for the skidding load-out operation. We appreciate Mammoet’s good quality of work, high level of safety awareness, professional skills, commitment, and dedication to successfully complete the operations especially during the challenging restrictions of the COVID-19 pandemic.” remarked China Offshore Oil Engineering & Co, a subsidiary of China National Offshore Oil Corporation who operates the Ling Shui 17-2 gas field project.

Work now continues at China’s Lingshui 17-2 development, which will be the country’s first deep-water gas field project and is expected to produce approximately 3 billion cubic meters of gas output annually. 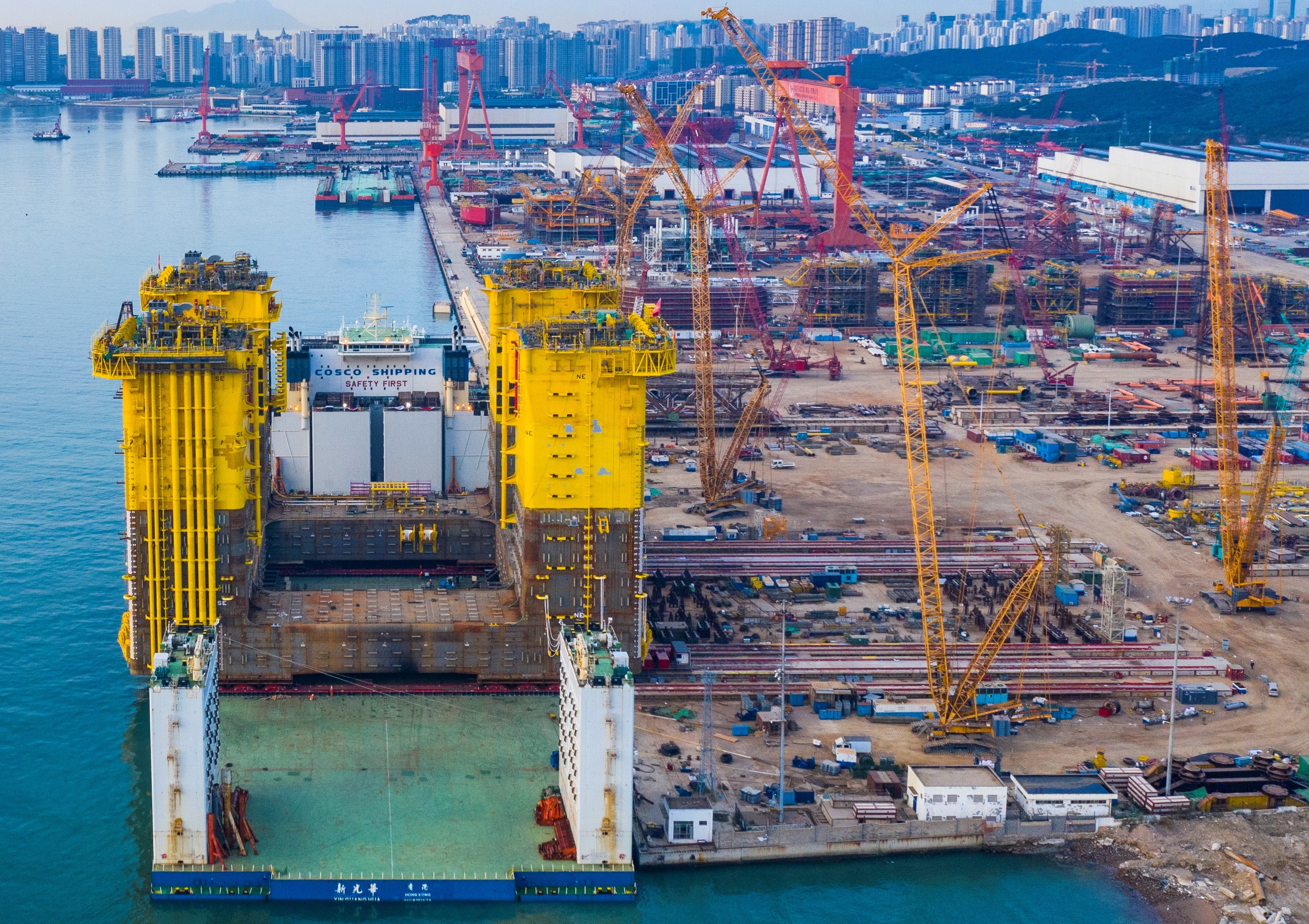