Mammoet, the world’s largest engineered heavy lifting and transport service provider, has introduced a CC 38.650 crawler crane to its fleet in Brazil during the third quarter of 2022.

The Brazilian government has steadily invested in expanding wind power generation throughout the country. In early 2022, wind energy represented about 11% of the Brazilian energy matrix, making it the third most common source. Overall, the country is the biggest wind energy producer across Latin America.

The new generation of wind turbines now debuting in Brazil is getting larger and heavier, as developers increase the use of concrete sections. These concrete tower sections can be two to three times heavier than their steel counterparts. 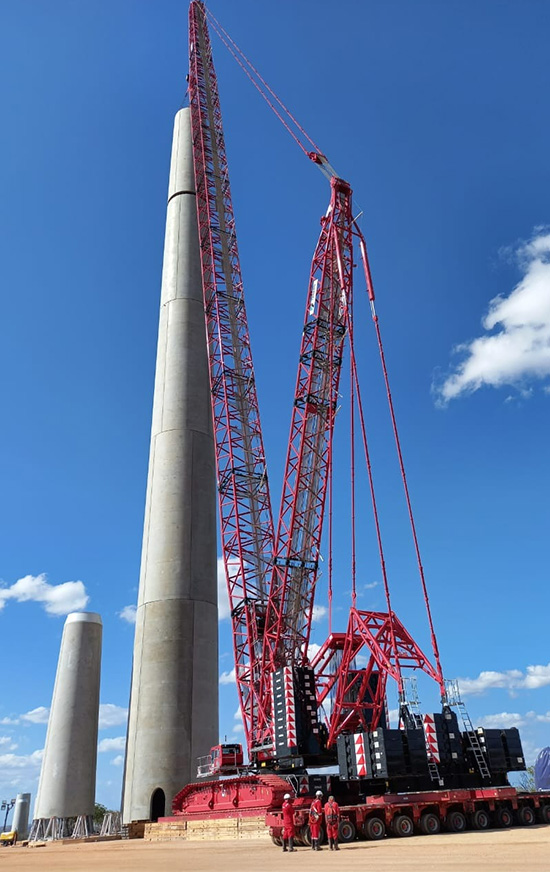 This means crawler cranes are used more frequently for projects with concrete towers, so that the sections can be lifted and tracked across the hardstand into their final installation positions. The increase in component weight also means developers can find themselves choosing from a smaller pool of lifting equipment, as cranes in the 600t-750t capacity range are often already at work in other sectors.

The crane is currently on site to complete its first tasks at the Cajuina Wind Farm in Angicos region, Rio Grande do Norte, Brazil. The Cajuina Wind Farm will be comprised of 55 wind turbine generators (WTGs) which will have a total capacity of 314 Megawatts.

Mammoet’s new machine will specifically focus on concrete tower erection, with boom lengths ranging from 105 to 129m (344 – 423ft.), while the crane has the capacity to lift sections up to 255 tonnes. The CC 38.650 is therefore an ideal solution which offers a good blend of capacity and maneuverability.

Mammoet has an unparalleled level of expertise in the wind energy industry, having been involved in the engineering, lifting, transport and installation of thousands of turbines around the world. From the earliest wind projects, Mammoet has transported, erected, and installed turbines for all kinds of on- and offshore projects, from a single prototype to large-scale wind farms.

This addition will strengthen Mammoet’s position in the local wind market, which is one of the fastest growing in South America.