After sailing from the Spanish Port of Algeciras, seven reactors needed to be unloaded and carefully transported upon their arrival at the Port of Houston in Texas. Global transport company Noatum Project Cargo contracted Mammoet to move the seven vessels over the road from the port to the final project site - an ethylene to alkylate plant located in Pasadena, Texas.

During the planning process, the team came to realize that the preferred bolstered load trailer configuration for over-the-road transport would not be approved by the Texas Department of Transportation. This configuration would overload two bridges encountered along the route, as the heaviest vessel made the crossing using a relatively small number of axles. 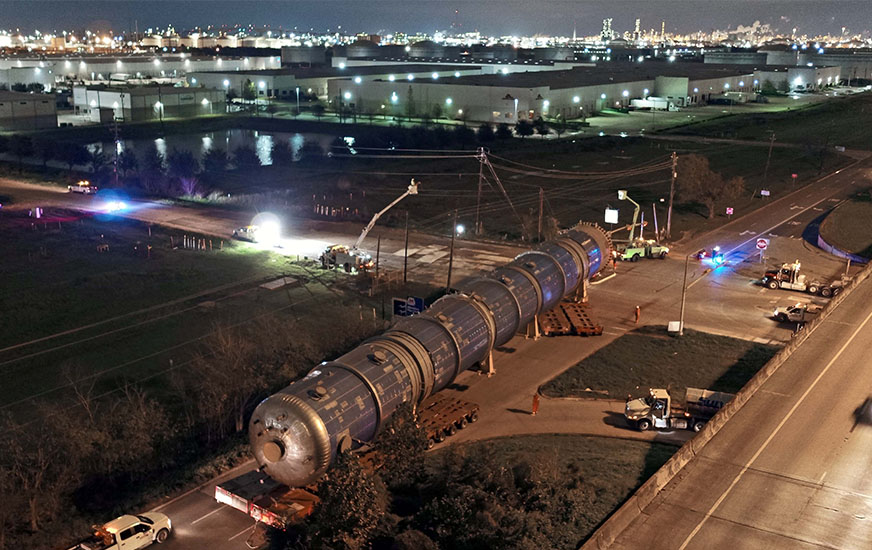 The standard solution for increasing the footprint of the trailers would be to add dollies that extend out from the sides of the trailers and push down to increase the trailer’s overall footprint, spreading the load more evenly over a larger area, when engaged. Unfortunately, the width of the bridges in question would not accommodate the addition of traditional dollies.

After thorough collaboration, Mammoet and Noatum’s engineering teams proposed a solution to add a third trailer underneath the load at the belly of the vessel, which would expand the trailer footprint while not overloading the two bridges, and also not expand the width of the transport overall.

The use of Mammoet’s split trailers would allow the traditional transport to travel free and clear of any additional equipment for most of the route and for installation and removal of the additional trailer before and after the shorter bridge section of the route to take place quickly. This solution was approved by the state and the transport was given the green light.

The six smaller reactors were discharged from the ship directly to Mammoet trailers, and then transported over the road approximately 11 kilometers (seven miles) from the port to the project site. The largest piece, a deisobutanizer weighing 441.3t (972,912 lbs.) and measuring 60.5m (198 ft.), was offloaded from the ship by Big John and Big T (two specialized heavy lifting barge cranes). 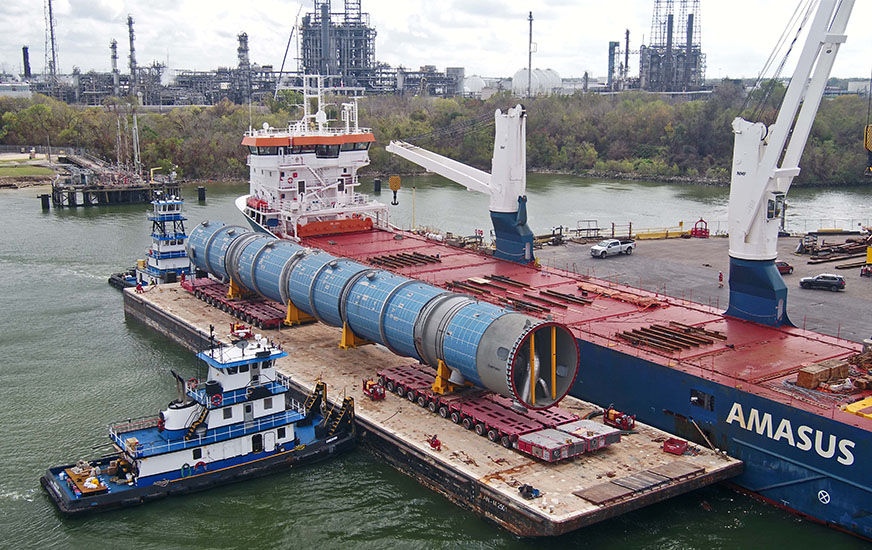 The cranes tandem lifted the vessel from the ship onto two double 12-line Goldhofer PST Bolster trailers pre-staged on a waiting barge, floated to a nearby roll-off area, successfully rolled off and then transported overnight to the project site to cause minimal impact on area traffic.

The smart use of Mammoet’s split SPMTs proved to be the most time effective and least labor-intensive method, ensuring that the transport was completed efficiently and according to schedule.